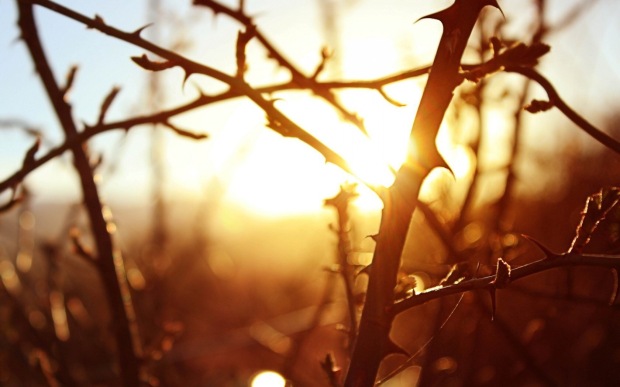 We all have weaknesses of our flesh. Whether Paul’s thorn was a physical ailment or not has been, and will continue to be, debated. Despite all the research and speculation regarding it, Biblical scholars cannot give us a definite answer as to what his thorn was. I think that’s the beauty of God’s Word. If He wanted us to know, He would have told us, but because this particular detail is missing – we can all relate. We can all identify with Paul’s struggle in one way or another.

So what’s you thorn?

Is it a sickness or physical limitation that makes you feel weak? A mental illness or emotional burden that seems to drain you? An addiction or temptation that Satan consistently uses against you?

Thorns hurt. They’re uncomfortable, and humiliating, and they make us feel powerless. They empty us of our pride, of our strength, and of our sense of self-control.

And it all starts with sin.

“…Since you listened to your wife and ate from the tree whose fruit I commanded you not to eat, the ground is cursed because of you. All your life you will struggle to scratch a living from it. It will grow thorns and thistles for you, though you will eat of its grains.”

Thorns were not part of God’s original creation. Thorns were  not what He intended for us. He didn’t breathe them into existence, didn’t speak life into them, and definitely didn’t say that they were good. But that doesn’t mean He can’t still use them for good.

Look at the story of Joseph. Joseph had 11 thorns in his flesh – 11 brothers who hated him. He was despised and rejected, thrown in a pit, and left for dead. But God rose him up to a place of power, and many years later when he stood before the same brothers who nearly killed him, he said, “You intended to harm me, but God intended it all for good. He brought me to this position so I could save the lives of many people” (Genesis 50:20).

Satan intends to destroy us with thorns, but those thorns can be turned around and used for good. Time changes our perspective. What we see as painful thorns today, we may be able to look back on and see as hedges of protection.

When Jesus teaches the parable of the sower in Matthew 13, He gives an example of seeds that fell among thorns, and the thorns grew up and choked the young plants. In his explanation of the parable, He said, “The seed that fell among the thorns represents those who hear God’s Word, but all too quickly the message is crowded out by the worries of this life and the lure of wealth, so no fruit is produced” (Matthew 13:22). Don’t let the worries of this life be the death of you. Don’t allow the thorns in your life to choke you out and prevent your growth.  Don’t just listen to the Word of God, hear it. Don’t let the lies of the enemy drown out the voice of God’s truth. Allow His Words to soak in and saturate every part of your soul. Allow His Words to refresh and nourish you, and give you the strength to go forward. Allow the light of Grace to shine upon you. Don’t just hear His Word, but make His Word come alive in you. Then you will begin see patches of wisdom growing through the patches of thorns – growing through, in spite of the thorns. Satan will yet again taste the bitterness of his defeat as you begin to rise above what was intended to take you out.

But Jesus came to reverse the curse.

He came to rescue us from the curse.

Galatians 3:13 says, “But Christ has rescued us from the curse pronounced by the law. When he was hung on the cross, he took upon himself the curse for our wrongdoing. For it is written in the Scriptures, ‘Cursed is everyone who is hung on a tree.'”

He took upon Himself the curse we deserved.

He took our punishment.

He took our shame.

He took our thorns.

“Some of the governor’s soldiers took Jesus into their headquarters and called out the entire regiment. They stripped him and put a scarlet robe on him. They wove thorn branches into a crown and put it on his head, and they placed a reed stick in his right hand as a scepter. Then they knelt before him in mockery and taunted, “Hail! King of the Jews!” And they spit on him and grabbed the stick and struck him on the head with it. When they were finally tired of mocking him, they took off the robe and put his own clothes on him again. Then they led him away to be crucified.”

I have related to Paul’s thorn in different ways, for different reasons, throughout different seasons of my life. But this week, God laid a particular sin very heavily on my heart and identified it as a thorn in my flesh. Something that may seem so menial to someone else, became a very real and very big problem in my life. A little thorn can do a lot of damage. A little lie. A little disobedience. A little pornography. A little drink. A little pride. A little greed – It cost our Savior’s life. We don’t know the damage we are doing to ourselves and those around us when we sweep our sin under the rug and neglect to remember the cost that was paid to free us from it’s consequences.

I can relate to Paul’s struggle – My flesh is weak. But because of what Christ did for me on the cross, and because what I experienced on September 23rd 2006 and everyday thereafter – I can also relate to Paul’s salvation.

“My flesh and my heart may fail, but God is the strength of my heart and my portion forever” (Psalm 73:26 NIV).

That is why, like Paul, I can boldly proclaim, “I am glad to boast about my weaknesses, so that the power of Christ can work through me… For when I am weak, then I am strong.” (2 Corinthians 12:9-10 NLT).