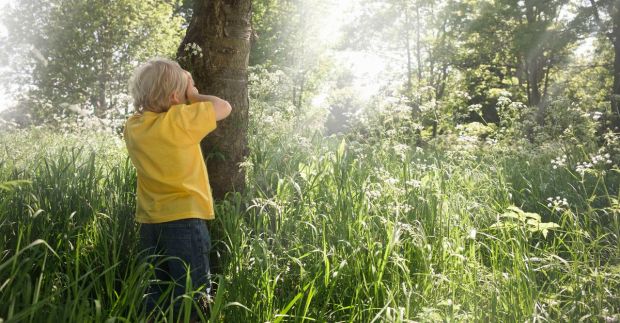 The concept of “Seeking God” has always fascinated me. The first time I really felt God speaking directly and personally to me was through Matthew 6:33. When I was in middle school, I seemed to see that verse everywhere I turned. “Seek ye first the Kingdom of God and His Righteousness, and all these things shall be added unto you.” The concept followed me through every other stage of life, in different ways and through different verses. In high school it was was Jeremiah 29:13, “And ye shall seek Me and find Me when ye shall search for Me with all your heart.” And in college it was Isaiah 55:6, “Seek ye the Lord while He may be found, call upon Him while He is near.” Then one day I stumbled upon a verse that threw me for a loop. It was Romans 3:11 which says, “There is none that understandeth. There is none that seeketh after God.”

What was that supposed to mean… There is none that seeketh God? Not one?

As I was reflecting on this, I began to think about the game of hide and seek. What does the game consist of? Someone hides, and someone tries to find them, right? But is God hidden that He needs to be found? What kind of God would hide himself from the people he loves and came to save, and then command them to come searching for him? I imagined this kind of God peeking his head out from around corners, laughing at us in our fear and confusion. And just when we’ve almost found him, he runs and hides again. That’s the image of God that a lot of people have in their minds today, but that’s not the God we serve. God is not hiding. God is not playing games. He is not mocking us. God reveals Himself to us everyday, in both big and small ways. Since the beginning of creation, God has desired a close and intimate relationship with us – but it’s our sin that separates us from Him. Isaiah 59:2 says, “But your iniquities have separated between you and your God, and your sins have hid His face from you, that He will not hear.”

We are the ones who are hidden.

Look at Adam and Eve in the Garden of Eden. They were created in the image of God. He formed them from the dust of the ground and breathed His very life into them. And for a time they lived and moved among Him. They walked and talked with Him. They were completely naked in the presence of God, and they felt no shame. That’s the way God intended us to live, with nothing to hide and no need to seek. But our sin separated us from Him. Scripture says Eve saw the fruit of the tree. It was pleasing to the eye and desirable for gaining wisdom, so she took it. She ate it, and she gave some to her husband, and both of their eyes were opened. For the first time, they saw their nakedness and they felt shame. So what did they do? They sewed fig leaves together. They made coverings. They tried to hide it.

But God, in His infinite mercy, doesn’t abandon us in our place of weakness. As Adam and Eve hid from God among the trees, God called out to them, “Where are you?”

“…There is none that seeketh after God.”

But God, in His infinite mercy, came looking for us. He came searching. He came calling. Luke 19:10 says, “For the Son of man is come to seek and to save that which was lost.”

Jesus came to seek us and save us. He came to call us out of hiding. But it is up to us to respond to the call.

When God called out to Adam and Eve, “Where are you?” – It was not because He didn’t know where they were. There was a purpose behind it. I’ve noticed that whenever I’m upset about something, my friend always asks me, “What’s wrong?” And it frustrates me – because I know she knows me well enough to know what’s bothering me. So what’s the purpose of asking a question you already know the answer to? But she does it for my own well-being. She does it because she knows I need to give a voice to the hurt. I need to admit it, confess it. I need to let it out so it doesn’t fester inside of me. And it’s the same way with God.

God doesn’t ask a question He doesn’t already know the answer to. Jeremiah 23:23-24 says, “Am I a God at hand, saith the Lord, and not a God afar off? Can any hide himself in secret places that I shall not see him? saith the Lord. Do not I fill heaven and earth? saith the Lord.” God is both near and far, He fills both time and space. He is omnipresent – in all places. We cannot run from His presence. He is omnipotent – all-powerful. There is nowhere we can hide that He can’t find us. He is omniscient – all-knowing. He knows us better than we know ourselves. We cannot hide our heart from the God who created it.

When He asks, “Where are you? – It’s because He wants to hear our response. God could have gone directly to Adam and Eve, He could have forced them out of hiding. But what would that have accomplished? Relationships are built on communication – call and response, question and answer. God desires a relationship with us. He is our King, not our Dictator. We have been adopted as children, not forced as slaves. He desires our loving obedience, not robotic obedience. A relationship with God is an invitation to commune with Him. He knocks at the door of our heart (Revelation 3:20), He doesn’t force entry. John 10:1-3 says, “Verily, verily, I say unto you, He that entereth not by the door into the sheepfold, but climbeth up some other way, the same is a thief and a robber. But he that entereth in by the door is the shepherd of the sheep. To him the porter openeth; and the sheep hear his voice: and he calleth his own sheep by name, and leadeth them out.” This is the same Good Shepherd who leaves the 99 to go searching for the one lost sheep (Luke 15). This is the same God who comes searching for us in the midst of the storm, in the midst of our fear and confusion, and bids us come to Him walking on the water (Matthew 14:28-29). This is the same God who says, “Come, follow me, and I will make you fishers of men” (Matthew 4:19). This is the same God who says, “Come unto me, all ye that labour and are heavy laden, and I will give you rest” (Matthew 11:28).

He is calling, He is waiting.

Amazing grace, how sweet the sound, that saved a wretch like me. I once was lost, but now I’m found.